Are You An Introvert Or A Extravert?

Here is something that hit me recently: For a long time, I had a certain idea about what makes an introvert or an extrovert. I had always thought that it works something like this:

That was kind of my general perception. Doing just a little bit of reading made it clear very quickly that my thinking was way off!Related: 10 Rules For Brainstorming Without Alienating Introverts . Recently I dug into some of the full-on research about introverts versus extroverts, and I think I’m much closer to understanding what the terms introvert and extrovert actually mean. When we briefly discussed this topic internally here at Buffer, a lot of people got very excited. So I hope what I’ve learned might be helpful to you, as well.

WHERE IT ALL STARTED–AND WHY I HAD IT ALL WRONG

If we go a bit farther back, we find that the terms introvert and extrovert (originally spelled extravert) were popularized by Carl Jung in the early 20th century. Unfortunately, their meanings got confused between then and now, and we started thinking that everyone belongs to one camp or the other. But actually, Carl’s point was that these are the very extremes of a scale. Which means that most of us fall somewhere in the middle. There is no such thing as a pure introvert or extrovert. Such a person would be in the lunatic asylum. –Carl G. Jung

So really, if we looked at how most of us operated, we would never be on either spectrum of the scale. It’d be much more likely that we are somewhere in the middle like this:

There are a few theories about the differences between introverts and extroverts, and some recent research has even shown that our genetic makeup has a lot to do with which tendencies are strongest in each of us. And unlike my theory about how outgoing or shy we are, introversion and extroversion actually relate to where we get our energy from. Or in other words, how we recharge our brains. Introverts (or those of us with introverted tendencies) tend to recharge by spending time alone. They lose energy from being around people for long periods of time, particularly large crowds.

Extroverts, on the other hand, gain energy from other people. Extroverts actually find their energy is sapped when they spend too much time alone. They recharge by being social. In the ’60s, psychologist Hans Eysenck proposed that the difference between introverts and extroverts was that they simply had different levels of arousal–meaning the extent to which our minds and bodies are alert and responsive to stimulation. Hans’s theory was that extroverts have a lower basic rate of arousal. This means that extroverts need to work harder to arouse their minds and bodies to the same ‘normal’ state that introverts might reach quite easily. This leads extroverts (or extroverted people, though they might not be quite on the extreme end of the scale) to seek novelty and adventure, and to crave the company of others.

For introverts, this kind of stimulation can be overwhelming, since their rate of arousal is much higher, so they are stimulated easily. Time alone, one-on-one conversations and predictable situations are more likely to be pleasant for introverts who are more sensitive to external stimulation. This becomes especially interesting if we look at any other of the most common elements of body language and how introverts and extroverts might perceive behaviors differently.

On the same note, while exercising makes you happier in general, for an introvert to do a group sport, this might not lead to happiness in the same way it does for an extrovert.

HOW THE BRAINS OF INTROVERTS AND EXTROVERTS OPERATE DIFFERENTLY

Research has actually found that there is a difference in the brains of extroverted and introverted people in terms of how we process rewards and how our genetic makeup differs. For extroverts, their brains respond more strongly when a gamble pays off. Part of this is simply genetic, but it’s partly the difference of their dopamine systems as well. An experiment that had people take gambles while in a brain scanner found the following:

The nucleus accumbens is part of the dopamine system, which affects how we learn, and is generally known for motivating us to search for rewards. The difference in the dopamine system in the extrovert’s brain tends to push them towards seeking out novelty, taking risks, and enjoying unfamiliar or surprising situations more than others. The amygdala is responsible for processing emotional stimuli, which gives extroverts that rush of excitement when they try something highly stimulating that might overwhelm an introvert.

More research has actually shown that the difference comes from how introverts and extroverts process stimuli. That is, the stimulation coming into our brains is processed differently depending on your personality. For extroverts, the pathway is much shorter. It runs through an area where taste, touch, and visual and auditory sensory processing takes place. For introverts, stimuli run through a long, complicated pathway in areas of the brain associated with remembering, planning, and solving problems.

WHAT ARE SIGNS THAT POINT SOMEONE CLOSER TO AN INTROVERT? 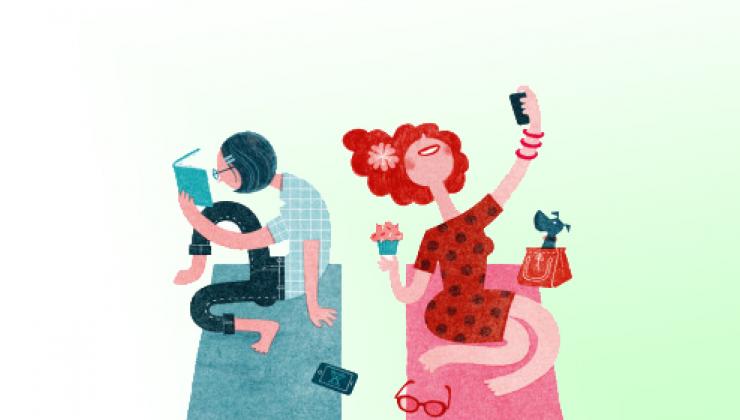 Introverts are tricky to understand, since it’s so easy for us to assume that introversion is the same as being shy, when, in fact, introverts are simply people who find it tiring to be around other people. I love this explanation of an introvert’s need to be alone: For introverts, to be alone with our thoughts is as restorative as sleeping, as nourishing as eating.

Introverted people are known for thinking things through before they speak, enjoying small, close groups of friends and one-on-one time, needing time alone to recharge, and being upset by unexpected changes or last-minute surprises. Introverts are not necessarily shy and may not even avoid social situations, but they will definitely need some time alone or just with close friends or family after spending time in a big crowd.

WHAT MAKES SOMEONE CLOSER TO AN EXTROVERT?

On the opposite side of the coin, people who are extroverted are energized by people. They usually enjoy spending time with others, as this is how they recharge from time spent alone focusing or working hard. I like how this extrovert explains the way he/she gains energy from being around other people: When I am among people, I make eye contact, smile, maybe chat if there’s an opportunity (like being stuck in a long grocery store line). As an extrovert, that’s a small ‘ping’ of energy, a little positive moment in the day.] 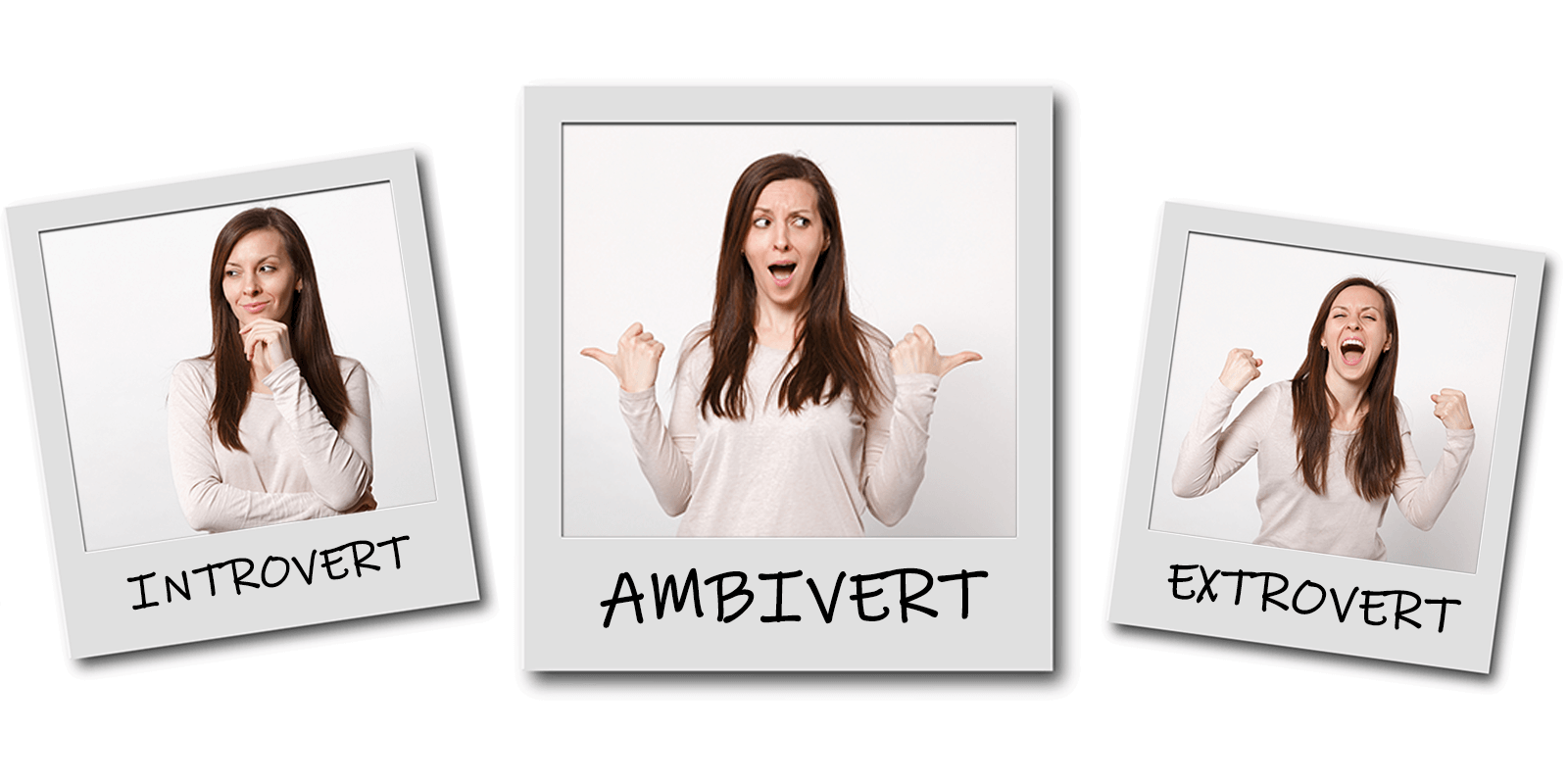 Since introverts and extroverts are the extremes of the scale, the rest of us fall somewhere in the middle. Many of us lean one way or the other, but there are some who are quite balanced between the two tendencies. These people are called ambiverts. The last time I took a personality test, I was smack-bang in the middle: 49% extroverted, 51% introverted. It’s hard to get more middle ground than that! (if you’re curious, you can try this quiz to see where you fit on the scale)

So let’s look at how an ambivert compares. Ambiverts exhibit both extroverted and introverted tendencies. This means that they generally enjoy being around people, but after a long time this will start to drain them. Similarly, they enjoy solitude and quiet, but not for too long. Ambiverts recharge their energy levels with a mixture of social interaction and alone time.

Though ambiverts seem to be the more boring personality type, being in the middle of everyone else, this balance can actually be a good thing. A study by Adam Grant, author of Give and Take: A Revolutionary Approach to Success, found that ambiverts perform better in sales than either introverts or extroverts. Ambiverts actually closed 24% more sales. The commonly held myth that being highly extroverted is important for a salesperson is actually untrue, since extreme extroverts lack the balance of an ambivert, which helps them to use varied approaches to closing a sale.

On another note, we’ve explored before that simple productivity tips might not work in the same way they do for introverts versus extroverts. But knowing where you are on the scale can make a big difference in improving your daily productivity outcome.

HOW TO GET THE BEST OUT OF EVERYONE: FOCUS ON AWARENESS FOR EACH TYPE 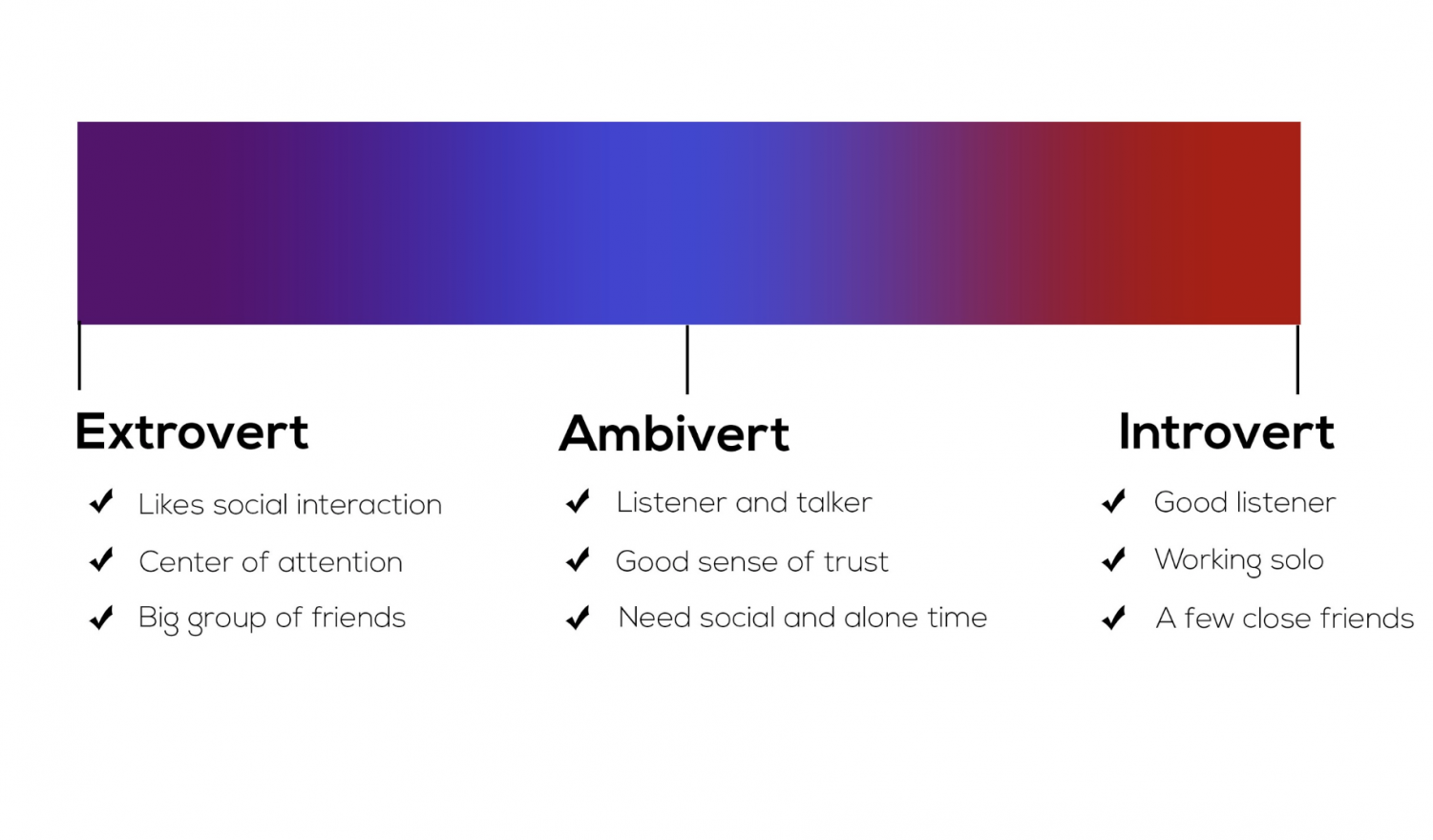 It’s pretty much certain that we’re going to come in contact with a variety of personalities throughout our lives, from extreme introverts to extreme extroverts, and everyone in between. Understanding the differences between these tendencies can help us get along with others and get the best out of everyone. This story about an introvert and her extroverted roommate is a great illustration of how unaware we can be of how much these differences can affect us.

The first few months of living together didn’t work well because we didn’t know how to care for each other. I would try to give her space by always knocking on her door. She got annoyed because I kept knocking and wouldn’t let myself in, and I got annoyed when she barged into my room without warning!

Lifehacker has a great explanation of the differences between introverts and extroverts, which uses the analogy of being right- or left-handed. This is a great way of seeing the benefits of both tendencies, regardless of which one you exhibit more of:

Most of us will be one or the other, but writing with your right hand doesn’t render your left hand inert. Similarly, an extroverted person can still do things that aren’t typically associated with extroversion. Meanwhile, introverts can learn to adapt to more extroverted scenarios, even if it might not come as naturally.

This same article on Lifehacker goes on to make a really important point: “The absolute worst thing you can do with either type is use a single word to define your approach.” Understanding the tendencies of ourselves and others is just the beginning. Effective communication means we need to take into account each person’s personality as well.

If we focus on simply being extremely aware of which type we’re dealing with, noticing small behaviors that point us more in the extroverts or introverts direction, then I’ve we’ll be easily on the right track to dealing with people in the right way.